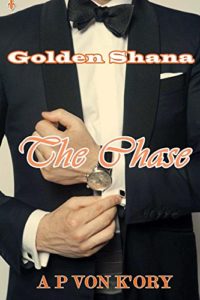 The first sentence of the book captured here “..SOME MEN WERE BORN TO rule the world; others were born to ruin it. Roman Alastair Northcott Broughton Castell was born to do both….” Struck me as I read it and I immediately wanted to know more about Roman Alastair whose character was presented with such powerful introduction. Reading further, I began to realize that Golden Shana does not have a medieval plot, rather it is a contemporary urbane work of fiction, albeit one with raunchy sex scenes.

You would be forgiven if you began to read Golden Shana from particular chapters and conclude that it’s a first rate erotica. However, the book goes beyond its no-holds-barred sex appeal.

Golden Shana may not be a fast paced thriller, but the plot takes one from one European city to the other and down to other places on the world map with descriptions of real life landmarks and places of interest as the characters globe trotted. The book will certainly be a traveler’s delight considering the authors knowledge of diverse places across the world and the sort of activities that go on there which were all pointed out in the book.

A P Von K’ory’s style of writing is descriptive and engaging, and helps the reader to feel at home with the characters and their worldview.

The use of borrowed words as well as few sentences written in languages other than English equally enhanced the sophistication of the book.

The major characters in the book, especially Roman, his mistress Marie and a few others were fairly developed.

Aside its lewd nature, Golden Shana is quite educative and enlightening in diverse areas of knowledge such as history, geography, politics, health etc.

The book is not efficiently formatted as there were one or two full page gaps in-between chapters which are not supposed to be so.

The plot seem to have more sex scenes than other activities, well I’m not sure if this should be a con or rather a pros since sex actually sells and some readers would probably enjoy them.