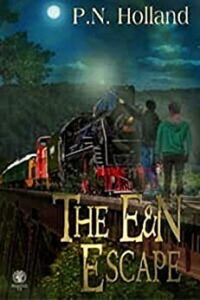 Three teenagers, Sarah, Billy and Ricky were traveling for a soccer match in an old train when two of them disappeared at a station where the train made a brief stopover. Billy emerged in a lonely snow covered area where he encountered Azandra, a purple eyed lady they earlier met in the train, and she revealed to him that he was on a time travel into the future. A lot has already happened to the world, including World War 111 that left over 6 billion people dead and a polar shift that resulted in a new ice age.

Azandra was from an alien world and was hoping that the duo of Billy and Ricky would help to stop Mohryia and the other wizards. The fate of the world and the galaxies would depend on them.

Other characters in the book include Azandra, Lolly, Kassandra, Lenora, Rhunella, Leylandria, and Rodan etc.

The E&N Escape is a thrilling YA Fantasy novel that will keep any reader turning its pages till the end.