Home > The Everlasting Spring: Beyond Olympus: Aaron and Alana 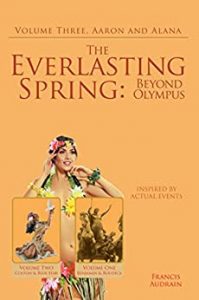 In 1943, Aaron was born in the small fine city of Reno, far removed from Europe where a devastating WW11 was raging. He was supposed to be safe but his mother was of German origin, the nation of the Nazis bringing war upon others. It wasn’t long before Aaron found himself running away from continuous mob attacks.

Life in the little but beautiful city of Reno won’t be the same again for Aaron. However, he was determined to survive the onslaughts and do exploits.

Characters in the book are Francis, Emily, Amelia, Tony, Eva, Delores, and Edna among others.

This book completes a trilogy that includes two previous editions with the same title. A fascinating factor to note is that this isn’t a work of fiction because the events actually happened to real people over the ages, including the author. Just like the other two before it, this edition of The Everlasting Spring is highly informative and also enjoyable to read.

The Everlasting Spring creates a vivid picture of what the United States used to be like in the 1940’s and earlier—it’s the sort of book that leaves nostalgic memories in the mind of the reader!