Home > The Lady is Trouble 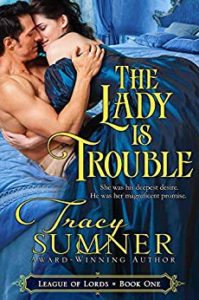 The Lady is Trouble captured the sights and sounds of what living in the 19th century England was all about. It was written in a poetic way, and the author made use of certain terms and phrases that is in sync with what obtained during the period.

The state had declared that clairvoyance was unlawful and those with the gift of visiting the “otherworld” were being arrested and tortured. Just like many others, Julian and Piper were wary not to be discovered. Piper’s grandfather had rescued Julian when he was still young and vulnerable, and he in return pledged to rescue others as well, and he followed it through by saving Finn who was not only gifted but also an orphan.

Julian was torn between protecting Piper and manifesting his love for her, and worse still, the gift of clairvoyance equally stood in the way. However, he must find a way around the barriers so they could live a happy life together—Piper meant the world to him.

The book is all about love, determination and passion during “a dark period”.

BIO: Tracy’s storytelling career began when she picked up a copy of LaVyrle Spencer’s Vows on a college beach trip. A journalism degree and a thousand romance novels later, she decided to try her hand at writing a southern version of the perfect love story. With a great deal of luck and more than a bit of perseverance, she sold her first novel to Kensington Publishing.

When not writing sensual stories featuring complex characters and lush settings, Tracy can be found reading romance, snowboarding, watching college football and figuring out how she can get to 100 countries before she kicks (which is a more difficult endeavor than it used to be with her eleven-year-old son in tow). She lives in the deep south, but after spending a few years in NYC, considers herself a New Yorker at heart.

Tracy has been awarded the National Reader’s Choice, the Write Touch and the Beacon – with finalist nominations in the HOLT Medallion, Heart of Romance, Rising Stars and Reader’s Choice. Her books have been translated into German, Dutch, Portuguese and Spanish. She loves hearing from readers about why she tends to pit her hero and heroine against each other and that great novel she simply must order in five seconds on her Kindle.