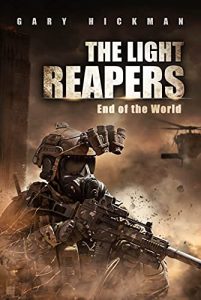 The Light Reapers are a group made up of 8 highly efficient but ruthless US military combatants. They had successfully conducted several special ops in the past, all with top notch result. Thus, when a tri-nation combo; made up of Pakistan, Iran and Palestine, with the backing of China and Russia joined forces to expedite the creation of a biological weapon they hoped to unleash against their respective enemies, they were called upon to destroy it. Unfortunately, this was an extremely dangerous task and to worsen their situation, they had little information aside the location of the facility in a remote desert.

Reading this book feels very much like watching an action movie in 3D, as guts get spilled, bloods flow and limbs shattered. It is a thriller like no other and promises to keep you on the edge!

BIO: Born into a violent childhood, Gary was always seeking refuge somewhere. This led him to join the military and was assigned to the 101st Airborne. Serving in Desert Storm, he was then recruited by a security contract company. Gary performed clandestine missions overseas for a number of years, but finally settled down. He is now the Director of Operations for an IT company in Northern VA.

He has been a martial arts/self-defense instructor for twelve years.

Gary is also the driving force behind Reap the Light. A music project that exposes metal/hard rock to new generations while supporting important causes. By supporting this project, you’ll be providing help to victims of Domestic Violence, PTSD and depression as well as musicians and artists. Gary writes all lyrics for each song as well as arrangements, producing and mixing.