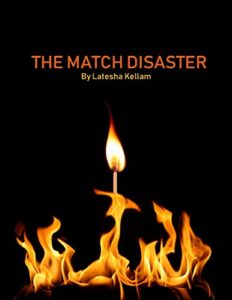 The Match Disaster is more or less like a memoir written in story form—albeit a very emotional one. It captured the realities of modern day dating and how challenging it could be trying to find true love and happiness in a partner.

Still smartening from her broken marriage, Lacey couldn’t believe her luck when she eventually came across a handsome guy she met on a dating site. Just like Lacey, he too was a divorcee with children.

Lacey was deeply religious and believed so much in her faith, but she couldn’t help falling in love with him despite a voice that kept warning her to take things easy as well as several red flags along the way. Not to be deterred, Lacey threw everything into the ring, in an effort to make the relationship work.

The book is relatively small but is embedded with lots of life’s lessons on where to draw the curtain as well as things that should or should not be tolerated in a partner, especially when we desire to live with our dignity unscathed.

What Lacey passed through is easily relatable by many women out there who have been handed the short end of the stick. However, they too can find the courage to stand for themselves just like Lacey!