Home > The Summer of Him 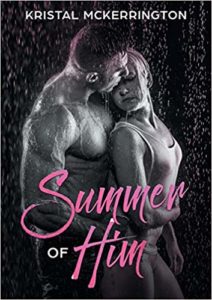 The book is about two sports entertainers, wrestlers actually who had to struggle in-between keeping a tough job and maintaining relationships with their spouses. While Trace loved fun and the easy life, Jim had to go beyond and above to fend for his fairly large family.

Kate may have left him and moved on with her life and a writing career but Trace was finding life difficult without her.

A first marriage that went terribly wrong had made him resolve never to fall so madly in love again; it was a personal conviction he was determined to keep until he met Kate.

Trace felt like he has lost the only perfect woman in the world. A lady that understood him, advised him, stood with him through thick and thin but he was only stupid to have allowed his past unsavory relationship to get in the way. With each passing day Trace existed without Kate in his life, the closer he drew towards insanity.

However, despite the tough appearances Kate usually put up before Trace, there were tell-tale signs that she still had feelings for Trace, even if she wouldn’t bring herself to admit it.

It was a battle of wits between the two former lovers but Trace was determined to win her back against all odds.

Written through the perspective of Trace and Kate, The Summer of Him is an interesting story of love, passion, and intrigues with a good plot and well developed characters. However, the proofreader/editor did a poor job. There are still lots of glaring errors and typos that ought to have been weeded out.