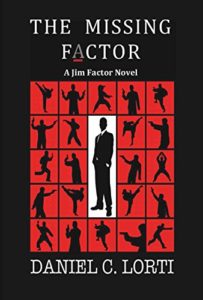 The protagonist is Jim factor, a top arms dealer and former air force man, despite working in a business terrain that could be described as sharks infested, he chose to remain clean and focused but that was until he met Carlos Sengretti. His involvement with Carlos who was not only greedy but equally carefree in a supposed confidential business deal which resulted in its discovery by the US Customs Service. Mikhail Borichev felt it was Jim that leaked the information and thus sent Russian hit men to murder him. Carlos got wind of the assassins coming after them and was lucky to escape through the borders without being apprehended and was on his way to South America leaving Jim behind to save his own neck and that of his family. Jim suddenly realized that he was living on borrowed time and must disguise and leave immediately if he were to stand any chance of escape.

The Missing F_ctor is a book filled with suspense and action just like the movies. The scenes kept changing from one country to another, and between continents just as wars and crises from one region to another meant a steady demand for arms which were to be met by Jim and others in his field of business.

The antagonist is Mikhail Borichov, a shrewd Russian businessman and arms dealer who exploited the collapse of the Soviet Union to make fortunes through stealing, buying and selling of military hardware and as a matter of necessity; he made contacts with the Russian mafia. With the help of the Russian mafia, he was able to remain on top of his game by eliminating those who had in one way or the other stepped on his toe.

In between the two adversaries are other characters in the book who all contributed their own quotas in ensuring that The Missing F_ctor had no dull moment.

However, there were a couple of typographical errors found in the book which ought to have been detected by the editors. That notwithstanding, The Missing F_ctor is a book one can read over and over again without getting tired.

BIO: A writer of factual fiction, Daniel C. Lorti is a former aerospace engineer with military sensors, weapons, and intelligence background, and a Chief Radar Engineer for the Northrop Grumman Corporation for many years. In 1995, he was appointed to President Clinton’s twenty-member conference committee for Trade and Investment in Northern Ireland. As an international arms broker, he conducted business in Europe, the Middle East, and Asia. The Avignon Legacy, the story of a centuries-old missing Papal treasure, was his first novel. The Missing Factor is only the beginning of his series of Jim Factor novels. All are published by Argus Publishing.