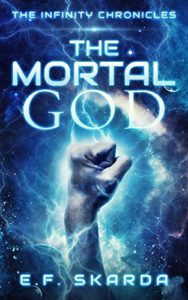 The aftermath of a destroyed earth was a savage society where Aeron was worshiped as god. At barely six years of age, Kyle Griffin was quite too young to make any meaning of the evil things that were happening all around him.

The Infinity Chronicles revolves around Kyle’s growing up in the galaxy, just as his father Marcus tries to live in the shadows of Aeron, his oppressive grandfather. His mother, Becca was quite frustrated with the whole setup, but she couldn’t do much more than to sulk it up. Things changed rapidly when it became apparent that Kyle was gifted with supernatural powers and the authorities through Dr. Preston demanded that he should be recruited into the Infinity Program. It was a bitter pill to swallow for everyone in the family, but Marcus who was eager to please Aeron had to give in against both Becca and Kyle’s wishes.

Kyle rose through the ranks as his supernatural powers made him almost invincible. However, the gruesome murder of Becca would leave him in a murderous rage as he seeks for revenge, against all odds.

The Infinity Chronicles is a sci-fi with a rich plot and is quite captivating to read.