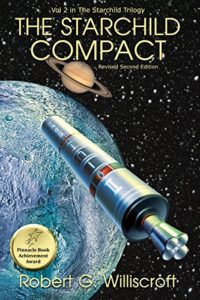 The Starchild Compact is another blockbuster science fiction. It combines thorough research and hyper-imaginative reasoning to bring about possible future real life scenarios.

The book has a long list of characters and each of them was introduced alongside their bio, thus giving them a nonfictional appearance.

In The Starchild Compact, the Slingshot Technology that was earlier developed for convenient space travel has now come into wide use. Likewise, the notorious character, Saed Ishmael who led a jihad for the Persian Caliphate is back once again, but this time his mission was to sabotage the Cassini 11 mission.

However, just like most thrillers, the plot of the book equally towed the path of stereotypes and believable inclinations.  As such, the antagonists happened to be the usual villains—the Islamists sponsored by Ayatollah Khomeini of the Persian Caliphate against the Jews and American interests. The author also did a good job of incorporating global politics and ideologies as found within diverse countries such as India, Russia, China, France, Germany etc.

There was also a throwback to historical events that occurred a long time ago, and involved some biblical characters such as Noah and Shem as well as the building of the Ark although the activities were of a different dimension.

The book has lots of intrigues to keep the reader engaged till the last word.