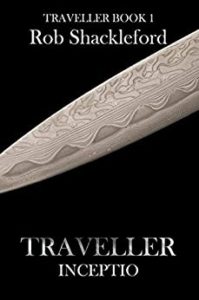 The book commenced on a thrilling note as Michael fought his way through a pack of wolves that attacked him in the jungle. The author maintained the adrenaline surging momentum by not leaving out any detail in the fight between Michael and the ferocious animals.

One interesting feature about this book is that it actually feels like watching a movie, albeit through the pages of a book.

The book has two distinct plots; one centers on Michael as he wanders through the jungle while the other is about a group of PhD students who were requested to research for a new type of baggage processing scanner.

Phil Walker alongside Allen, Craig, Chris, Yeti and Mel Conti under the sponsorship of Helguard clearly underestimated the challenges they were going to pass through as they got pushed to the brink.

Under the Saxon Traveller project, Michael was cut off from the outside world as he found himself living with monks in the Giolgrave community, deep in the dense forest. Michael couldn’t help taking sides with Giolgrave as they fought off adversaries in deadly battles that included the Vikings.