Home > Why I Needed To Return From the Future 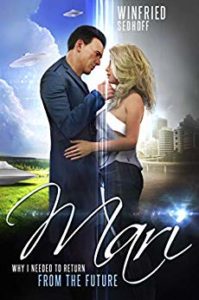 The story began on a futuristic date, as the protagonist, a high ranking official narrated his ordeal. He was not only spirited away forcefully, his beloved wife, Mari was equally under arrest for no fault of hers. Benjamin had been sent on a time travel mission that unfortunately went awry. He had came into the present world, albeit unintentionally as the Noretian ship they were traveling in developed mechanical fault and crash-landed on earth. Completely lost on everything and had to be taken on a crash course on what a driving license is, how to use a phone and virtually all forms of technology that were in use in the current world he found himself.  His minder, Martino, informed him how important it was for him not to lose his phone so they could easily keep track of him through GPS.

The book is intriguing as the reader follows up on Benjamin’s experiences in a supposed new world. He felt that the people were miserable as everyone appeared to be lonely self absorbed. It was at such period that he met Mari. It was difficult for him to fit into the current time as virtually everything appeared odd to him.

Ben knew he was not to develop feelings for anyone since he could be recalled at very short notice, yet he couldn’t help falling in love with Mari.

Against Martino’s strict warning to stay off the radar as much as possible, and never to reveal his identity to anyone, Ben told Mari he was an alien from not just a different planet but also a future time.  As unbelievable as it appeared at first, Mari later accepted his story as true. To complicate matters, Mari had earlier experienced a heartbreak that devastated her. When Ben heard about her former lover, he suddenly realized he could be putting Mari into risk of not just similar heartbreak, but also of her own safety should he become emotionally involved with her.

Mari wouldn’t let go of Ben despite knowing the details about him and had to inform Ben that she doesn’t mind sticking out her neck for him. However, in a twist of fate, there was a deep secret about Mari’s origin and identity too. She didn’t belong to the present period as well, both were from different centuries as opposed to the present time but now has a child.

What will happen to baby Lincoln who is now in the middle of the complicated situation?

Although the book is a decent work of science fiction; Ben’s comparative analysis of what obtains in his own time to what he was experiencing on earth in the meantime, made it all to appear convincing.