Home > A Beauty of Magic 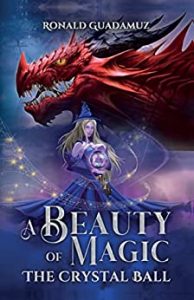 An American boy studying in high school thought he was a “player” and could get any girl he sets his eyes on. Ian seemed to be quite successful in his exploits until he met a beautiful brunette-haired girl named Lucy. However, Lucy told him that she would accept to date him only on the condition that he would go to a forest in Russia and retrieve a crystal ball. Ian was determined to win Lucy’s love and so he traveled to Russia, but when he got to the Forest of Akhmerovsky, he got more than he bargained for as it turned out to be a haunted temple where magic, sorcery, werewolves and other strange creatures lurked in every corner.

A Beauty of Magic is an adventure book and also has illustrations that photographically explain certain scenes. It is an interesting story and would be a delight to readers, particularly teenagers.

BIO: Ronald Guadamuz lives in the city of Vallejo. He attended San Francisco City College to study Graphic Design and Literature. He writes daily for new upcoming books and currently working in management.