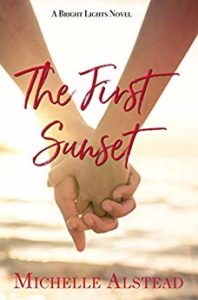 From the beginning of the book, one could easily feel strong emotions about Betsy’s bosom friend, Jane. A nice woman who has been forced to combine nursing her child with a survival battle against cancer, her bald head and the gray lines under lines were glaring evidence of what she was passing through.

The First Sunset has a rich plot that flowed with finesse, and the author’s use of witty phrases to bring home events as they occur makes it the more interesting. The book appeared to have more than its fair share of sob stories; while Jane had critical health challenges to overcome, Betsy on her part couldn’t seem to get over her ex husband. At thirty six, four chubby kids to parent alone and a body that was no longer attractive. She was scared she might remain single while Arthur, the very same man that left her in such unenviable state was painting the town red with another woman—having the best time of his life!

The First Sunset could certainly pass off as a comedy book. There is hardly a paragraph without one or two hilarious lines.

Twenty five year old David Winchester had fallen in love with Betsy, not minding the over a decade long age difference. For some reasons, Betsy didn’t believe it will work out between them and called the relationship off. Her four children meant the world to her and Arthur, her ex husband was already making plans on taking them from her, something she can only allow over her dead body.

David had hoped his coach, Gage could help him one way or the other to get back the love of his life. However, Gage couldn’t seem to understand why David would want to go crazy, even at the point of losing a lifetime opportunity of becoming a major league player, over a lady who isn’t just significantly older but had some other baggage. Gage knew what it means to miss out on such opportunity, considering how an accident ruined his own chances years back. He was a widower with a teen daughter and the loving memory of his dead wife, but he had to lookout for David.

Betsy knew she had to let go of David and with Arthur’s threat of taking custody of her beloved kids hanging like the proverbial sword of Damocles, a mortgage she could barely afford among other troubles, she was in a tight corner.

Jane’s debilitating illness kept getting worse and her letter to Betsy could pass off as one of the most emotional piece ever written.

The book is indeed very interesting and enjoyable, and sure has a happy ending although depending on the angle you view it from