Home > Beyond The Father 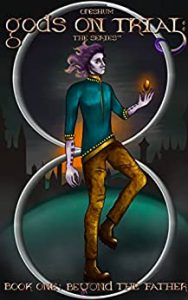 Anglid was the heir apparent to King Thio, the ruler of all Xżyberians yet he didn’t allow royalty to get into his head. His worldview was that everyone should be equal laborers, military and those considered of the royal class. The opportunity to start implementing his radical ideas presented itself when he turned eighteen and was scheduled to go on interplanetary tour.

When Commander Dugar assembled his troops in readiness to attack the Central Region under the leadership of King Thio, Liara felt it was nothing short of a suicide mission. She believed it was hasty, reckless and not well-thought out. But there was next to nothing she could do to stop it…..

The plot dwells around Mollards and non-Mollards as well as other extraterrestrial beings trying to survive violent storms while warring against each other.

Beyond The Father is a short but thrilling story that will certainly keep readers engaged till the end.

BIO: Opëshum has been writing since she was a child, and believes that authors are selected by their characters to bring their stories to the world. Incredibly shy and introverted, Opëshum does not make public appearances. She prefers to remain behind the scenes as the characters in her books take center stage. Her current work, the 8-Book SciFi Epic gods on Trial: The Series™ kicks off with Book 1, BEYOND THE FATHER.

Opëshum calls Sheridan, Wyoming her home, where she is currently writing Book 2 of this series. She lives in a modest Cape Cod dwelling on 3 acres of land where she lets a robust variety of sunflowers grow wild and untamed, while Aloe Vera and other succulents decorate almost every ledge within her house. An avid writer in the early morning and late at night, Opëshum often works on her manuscripts in rooms lit only by homemade candles.

She enjoys nature walks, full moons, and open spaces where she can stare up at the stars.

“I live my life in the shadows, and I am shy. For I know that my appearance is not pleasing to the eye.” – Opëshum Patroz