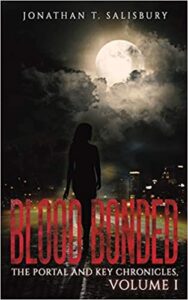 Some dangerous otherworldly creatures called Fae had descended on earth, led by the evil Ceann Olc and his soldiers; it was going to be a reign of terror but Eva was hoping to do all within her power to him. To Cean Olc, Eva was a traitor that will be neutralized sooner than later but in underestimating the extent of Eva’s powers aided by magic and a few accomplices, it will only lead to a long drawn battle with a not so guaranteed outcome.

Characters in the book include Derek, Abigail, Brynjar, Calder, Mr. Roper, Muzalim, Madame Fionrai, and Leigheas among others.

Going through the pages of Blood Bonded feels very much like watching a sci-fi movie, complete with all the actions, thrills and gore in 3D display! It has an engaging plot that is thrilling and suspenseful which could hold the attention of its reader till the end.

BIO: Jonathan T. Salisbury served over ten years as an Explosive Ordnance Disposal technician in the U.S. Air Force. He was awarded the Bronze Star for operations in Iraq and has deployed to multiple combat zones. He currently works in law enforcement, serving as a police officer and a SWAT explosive breacher. When not working, he spends time with his wife and daughter at their home in Idaho, enjoying the outdoor lifestyle and everything Idaho has to offer