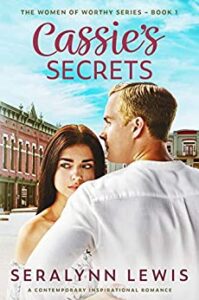 Cassie was a divorcee while Steve was a widower, and incidentally, none of them were interested in going into another relationship anytime soon. Both of them hadn’t been lucky in their respective former relationships. While Steve had to endure a partner who was grossly dishonest when she was alive, Cassie on the other hand, survived a turbulent marriage that ultimately ended in divorce—a path she wouldn’t want to thread again, at least not in the foreseeable future. However, Mia and Fiona had other plans they were desperately pursuing, aimed at matchmaking the two. Everything will eventually culminate into a mishmash of interests and wits.

One striking thing about Cassie’s Secret is the fact that the book is written in a down-to-earth manner that made it appear a little nonfictional yet highly captivating. The characters are well developed and easily relatable.

Other characters in the book include Gabby, Stella, Tina, Bella, Robbie, and Becka etc.

Cassie’s Secret is an absolutely entertaining book that will surely captivate its reader and keep them turning the pages till the very end—it’s indeed a masterpiece!