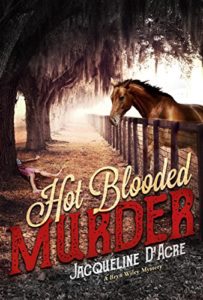 Hot Blooded Murder began with Bryn Wiley, a blogger, narrating how she was en route to a horse breeder’s house. As one continues to read from word to word, you can’t help but marvel at the way the author described unfolding events. I felt my heartbeat quicken by the sheer suspense and build up towards what my gut feeling told me was not going to end well. I literally felt like I was right there inside the book and witnessing the events first-hand. Stating that Hot Blooded Murder is suspense-filled and well detailed will be putting it mildly.

Well, I’m not one who exaggerates things and neither am I easily impressed but I must give Jacqueline D’Acre her due credits for penning down such an awesome book. Did I inform you that as I read through Hot Blooded Murder, my countenance kept changing as I flipped across the pages. Aside the suspense that made me to hold my breath, I was chuckling and smiling as well at the humorous lines that littered all through the book, especially Bryn Wiley’s thought process that is always down-to-earth and funny.

The characters in Hot Blooded Murder are well developed and the minute details provided by the author in each scene more than compensated for my lack of interest in cowboys and their horses. The scenes and characters seemed to jump on one’s face; all thanks to the author’s writing style that obviously didn’t take anything for granted—it is so “crazy” that little things such as a housefly perched on a doorpost, a drop of sweat or someone’s moist hand, and a horse’s stare are all part of the story that must be told!

Is Hot Blooded Murder without blemish? Absolutely not! Some words and phrases were repeated more often than necessary and there were quite a few minor typographic errors that ought to have been weeded out by the editor during proofreading.

Hot Blooded Murder is a reader’s delight and would most likely be enjoyed by all, and I equally did found it fascinating and intriguing.

I searched for possible cons all through the book but couldn’t find much aside the few I already mentioned above.

All things being equal, Hot Blooded Murder should end up as a classic!

BIO: I was born and raised in Thunder Bay, (formerly Fort William) in Canada. I had an old-fashioned childhood: kids played in the street, milk was delivered by horse-drawn wagons. From age three, I rode these horses every day. At seventeen, I had a nervous breakdown due to my father’s sexual abuse. Although an honor student, I couldn’t function well enough to finish high school. But, I pulled through it. I ran away from home to join the RCAF. Then I came home to a job at Chapples Department store’s window display dept. I worked the famous Santa Claus shows there designing and constructing sets and floats. Then I moved to Winnipeg, where I worked first, as a cocktail waitress, then as a commercial artist. I was able to attend the University of Winnipeg as an English major. I moved to San Francisco and went to Lone Mountain College, an adjunct to the University of San Francisco, on a Drama scholarship. I was selected to audition for a year’s training at San Francisco’s Repertory Theatre, ACT, (an alumnus is Nicholas Cage) and I won the audition over 200 others. (I performed 16 lines of Shakespeare’s Cleopatra and 16 lines of William Inge’s Come Back Little Sheba). But my husband accepted a position in Alaska and I lost my opportunity at ACT.
Next, I spent a year in Alaska working at an ad agency as a media buyer and copywriter. (When I had to leave Alaska in 1971, I was hired at the New York office of this agency as a copywriter, but again, my husband wouldn’t move to New York, so another great chance was lost). I moved to New Orleans (my spiritual home town) where I spent the next 30 years, most of the time owning and operating a film and video production company. I functioned as writer/director on over 100 productions mostly concerned with Big Oil offshore in the Gulf of Mexico. I won a national USA award for one production titled All Washed Up concerning the beach litter problem. I also established a stud farm and bred Egyptian Arabian horses. I wrote a column, Hoofbeats, for the Times Picayune, and hosted a live radio talk show also about horses. I was named “Horsewoman of the Year 1989” for my efforts in publicizing the horse industry. During that time my first novel, Between Extremities, was published and I was selected as a “Louisiana Author of Note.” In 2004 I moved back to Thunder Bay and my second novel was published—a mystery, set in Louisiana, titled Hot Blooded Murder, A Bryn Wiley Mystery.
I live with my cat, James Bond.