Home > Bird in a Snare 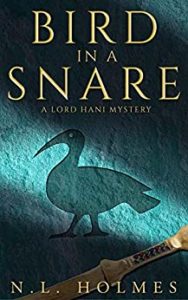 As the book progresses, it becomes obvious that the plot draws heavily from the rich ancient cultures of the Middle East, particularly Egypt, during a period when the country was at the center of global civilization. The story unfolds as Lord Hani was hosting the cunny Lord Abdi-ashirta to a lavish party at his home.

The story revolves around Lord Hani, a noble man who the king assigned the rather dangerous task of investigating the assassination of Lord Abdi-ashirta.

The author did a good job of capturing the sights and sounds that are prevalent during that era, while equally making use of English writing style that is in line with it. There is also a glossary that explains the terms and phrases that were used in the book.

Bird in a Snare captured some of the intrigues that usually take place when there is a power struggle within a kingdom and its vassal states. Aside the difficult to pronounce names in the book, it still remains quite interesting and enjoyable to read.