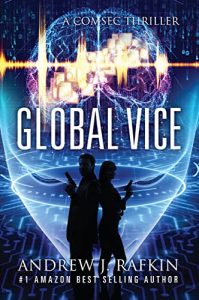 A trio made up of a security consultant, cybersecurity and AI expert, and an insurance claim investigator joined forces in a bid to unravel the truth behind a huge but potentially fraudulent claim from a precious metal dealer. However, when a million dollars’ worth of gold is involved and a cartel desperate to cash out at all costs, then the stake is bound to be elevated much higher as arson, murder and extreme violence is thrown into the mix.

Ben eventually realized what they were up against and not even the inclusion of Eve, the world’s most powerful computer, is enough to save them the trouble as things got messier.

Global Vice is a classic thriller with a captivating plot that involves crime, human trafficking and also romance. It reveals some shocking nefarious activities that are currently going on globally with very little attention paid to it. This is a book no one should fail to read!

BIO: Andrew J. Rafkin was born in 1946 in San Pedro, California.
He is the #1 Amazon bestselling author of Mexican Madness and
Angels Gate.
He served in the Navy during the Vietnam War and later graduated
from California State University, Dominguez Hills with degrees
in Economics and Marketing. He is a successful entrepreneur,
the president of Palos Verdes Security Systems, and is certified by
the Department of Homeland Security.
Andrew has received the EVVY literary award for Red Sky
Morning and the Readers’ Favorite Awards for his Madness trilogy:
Creating Madness, Mediterranean Madness, and Mexican Madness.
He recently added The Green Alliance to the series.
Rafkin’s novel, Reaper Six, is a gripping story about the leader
of a Special Black Ops team’s missions during the Vietnam War. It
was an Amazon Best Seller.
He co-authored with Louis Pagano to write Angels Gate, recipient
of the Global eBook and Readers’ Favorite awards. It is currently
under contract for production of a TV series.
He lives with his wife, Lynn, in San Pedro, California, and
spends his spare time reading, fishing, hunting, golfing, and making
wine.