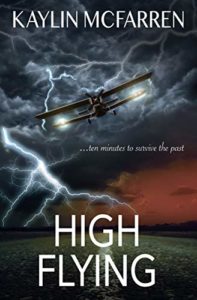 The book centers on Skyler and her travails while growing up under the care of a hostile grandfather who was always harsh on her. As if the lack of love she experienced at home was not enough, she also found it difficult gaining acceptance in her school except for Roxy who stood in for against bullies and subsequently became friends with Skyler. Her ambition was to become a pilot and Skyler was able to achieve it. However, things took a surreal turn when Skyler suddenly went on a time travel after she almost crashed her aircraft. She woke up to see herself existing in 1997, 21 years earlier. A time period when she was yet to be born and it meant coming in contact with her parents before they got married. She couldn’t tell if she was dead and now in a spirit world or if she has completely lost her mind.

However, the time travel afforded Skyler the opportunity to learn the truth firsthand about events that occurred about her dad and what ultimately led to his death as well as the fortune he left behind for her.

One could feel the suspense building as the book progressed; Skyler struggled to come to terms on why she was back to a period that was supposed to be history.

High Flying is a refreshingly unique book and is quite enjoyable with its funny lines and weird plot.

This is no doubt a thrilling masterpiece that can keep one spellbound till the end.

BIO: Kaylin McFarren has received 48 national literary awards, in addition to a prestigious Golden Heart Award nomination for FLAHERTY’S CROSSING – a book she and her oldest daughter, New York Times/USA Today best-selling author Kristina McMorris, co-wrote in 2008. Prior to embarking on her writing journey and developing the popular THREADS psychological thriller series, she poured her passion for creativity into her work as the director of a fine art gallery in the Pearl District in Portland, Oregon; she also served as a governor-appointed member of the Oregon Arts Commission. When she’s not traveling or spoiling her pups and three grandsons, she enjoys giving back to her community through participation and support of various charitable and educational organizations in the Pacific Northwest, and is currently the president of the Soulful Giving Foundation – a non-profit focused on cancer research, care and treatment at hospitals throughout Oregon. Her latest release, HIGH FLYING, takes readers on an unusual time-travel adventure, which asks challenging questions that will linger long after the final twists are revealed.