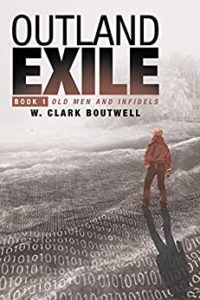 Outland Exile is part of the captivating Malila Series, and commenced on a high note as its main character, Second Lieutenant Malila Evanova Chiu’s avatar was in a deadly combat with two Movasi Whales, deep in the sea. She has no other option than to kill the two beasts, even while risking her own life, just to ensure the citizens she left ashore would not starve in the winter.

Malila’s patriotism to Unity State was beyond measure, so when she realized that Sunprairie has become a liability to Unity State, she decided that the best thing to do was to covertly eliminate it through sabotage. Since Sunprairie is under her watch, she believed she could get the job done with the help of a few others.  Unfortunately for her, she didn’t envision failure and its accompanying consequences.

The book has a rich plot and fairly developed characters, and with the author’s elaborate way of describing scenes, all combined to make it captivating.