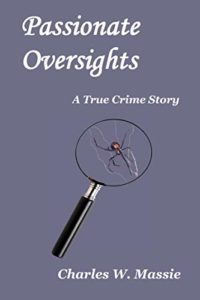 Reading just the prologue gave an insight on how thrilling the story would be. Unlike most other nonfiction stories that tend be streamlined and censored to fit into the narrative of the author, Passionate Oversights is a no-holds-barred real life story that equally touched on sensitive areas such as violence, romance and sex.

I give it to the author on how he told the story in very apt but funny way. I was literally going between laughter and smiles as I read some sections of the book. The book will no doubt rank quite high as not just a gripping thriller but also as a comic book.

Told through the eyes of Charlie, who was supposedly narrating his real-life but surreal experiences. Another factor that made Passionate Oversights unique and true to its nonfiction status is Charlie’s way of narrating events as they happened in chronological order as well as his relationship with Patriche, the exchange of letters between them and how everything went south over the course of time. Unknown to Charlie who was actually seeking for genuine love, Patriche was actually a nutcase and their affair was only going to be dangerous. This he had to learn the hard way!

BIO: His hobbies, when he is not writing, include progressive rock music, computers and other toys, traveling and enjoying the gifts that he has been blessed with. He loves animals, humor, exotic cars and practicing random acts of kindness.

He lives in the Commonwealth of Kentucky and New York State and maintains his website at: www.charleswmassie.com