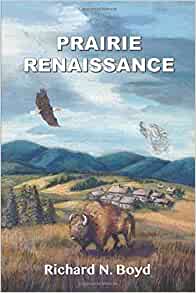 Prairie Renaissance has all the trappings of a nonfictional work yet the idea being projected in the plot is somewhat fictional in nature. Over the ages, the possibility of aliens being a reality has remained a fallacy to many people. Nonetheless, it has continued to generate lots of debate as well as investigation along the line.

In this book, an investigative reporter named Rickert got a clue on the existence of such aliens somewhere in the Oglala Lakota Reservation. A remote region originally occupied by the native American Indians. So, he set out to unravel what could turn out to be the most remarkable revelation in recent times.

A three-decade long galactic trip in a spaceship had transported the Opresinian aliens from their planet to earth, and their mission was to save planet earth from earthlings who were bent on destroying it with their so-called civilization.

Rickert was supposed to keep his knowledge as top secret but Agent Jammer who had scores to settle with him was determined to find out.

Prairie Renaissance is a thrilling and rather believable story about alien invasion of the earth, and has the feel of a Hollywood blockbuster movie—albeit in print version.

BIO: Richard Boyd is a retired professor of physics and of astronomy from Ohio state University. He’s published over 250 scientific papers and three scientific books, as well as (self-published) five novels, including this one.