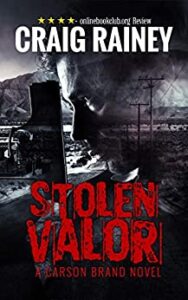 Brand was no coward and neither does he take prisoners, rather he had always believed in the mantra he learnt during his military days to always hit twice and never take chances against his opponents. However, moving into Mexico and squaring up against Rojas and his dangerous human trafficking cartel was a deadly situation worse than any he has experienced before. Not minding his precarious position, Brand was determined to not just save his own ass but also Christina who was being held captive too.

Characters in the book include Miguel, Javier, Fuentes, Natalie, Bert, Arturo, and Carlos among others.

As the reader goes through this interesting masterpiece of a thriller, one can’t but notice that Stolen Valor was not written in the usual picture-perfect flawless way, rather the author made it appear as real as a nonfiction with events occurring in a non-synchronized motion. The plot dwells on the cross border underground network of kidnapping, human trafficking and cartels.  This is a book that is not just entertaining to read but also enlightening as it reveals lots of information on how criminal syndicates operate.