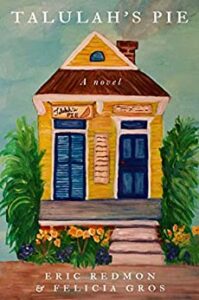 Two freshmen named Paul and Marie arrived college with just one thing in mind; to study and graduate with good grades. Although from different backgrounds and oblivious of each other’s existence, fate had a surprise package for them and only time will unravel it.

Talulah’s Pie is an exciting book that captured the lifestyle of two young adults who fell in love with each other when they least expected it. While studying in college, Paul and Marie realized they would have to pull resources together and build on each other’s strength for them to scale through and achieve their aims.

The characters are well developed, and the plot, based on college lifestyle, is equally thrilling. This book is a page-turner and would no doubt keep any reader engrossed till the very end.

BIO: Eric is a self-publisher of three novels currently on Amazon. There are some great reviews for the first three, but, as you know, it is very difficult for an Indie publisher to gain exposure. My name is Eric Redmon. My wife, Felicia Gros, teamed up with me for the fourth novel, a Romance titled Talulah’s Pie. Artwork for the cover, by Felicia, depicts a narrative from the book. It is not yet published but is in the process of being formatted.
Eric Redmon, age 66, is a husband, father, grandfather, and an Oral and Maxillofacial Surgeon, who works part-time at the VA Hospital in Martinsburg, WV. He has always loved to write, but became serious in 2012 and began work on his first novel, Cold Silence of Deception. It is an international Thriller about a covert military agent in a post 911 world. His second novel, Surrogate of Betrayal, is a story of three men who serve our country in Vietnam, and only two return. The story portrays their return from war, how they are received, and how the war continues to rage for them and their families. The third book is a psychological, suspense/thriller, Cut from the Fold. A man tries to escape a life of physical and emotional abuse by sailing away to the Caribbean immediately following the unsolved murder of his wealthy parents. He is trailed, as more murders pile up, by a Coast Guard Ensign, who is a strong family man with his own demons to quell.
Felicia Gros, age 54, is the coauthor of Talulah’s Pie. She is an artist, wife, mother, grandmother and retired teacher, and was instrumental in the development and writing of our submission.