Home > The Bartender: The Last Waltz 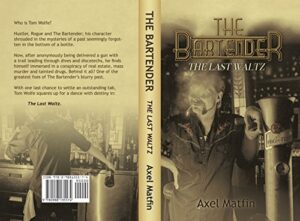 When Tom Wolfe’s pal, Lazlo was matched against Tiery in an illegal kick boxing fight, they knew it was going to be an uphill task for Lazlo to defeat the monster. However, the bout took a nasty twist when Tiery gave up the ghost in what seemed like strangulation by Lazlo and the duo found themselves up against a mob that had vested interest in Tiery.

Reading The Bartender series is akin to watching a Hollywood blockbuster movie. The book is embedded with lots of action, violence and gore. Similarly, the way the author narrates the story ensures that the reader’s adrenaline remains on overdrive.

Other characters in the book include Popaddy, Tye, VanGalen, Chef Stucky, Cormack, Carlo, Felicia, Chad, Sampson, and Drinkwater among others.

Tom was living life on the fast lane where drugs, crime and violence were a daily routine. Everything seemed okay until his girlfriend, Felicia, was murdered in cold blood. A distraught Tom could only hope to avenge but he would have to watch his back.

Tom Wolfe may be a bartender, but his adventures are endless as he continued to come up against extreme hurdles with near death experiences.