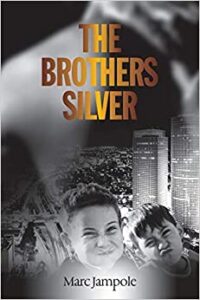 The Brothers Silver is a story about a rowdy American family of four where none of the members seem to get along with anyone. It captures the sort of thrills and frills people experience while growing up in a chaotic family. The story was narrated through the perspective of Jules, as he recounts everything that transpired between him and his kid brother as well as their parents cats and dogs daily routine.

Other characters in the book include Edwin, Ethel, Leon, Dave, Petey, Aunt Flo, Steve, Joe, Lee and Uncle Gene among others.

The book has a comical plot, well developed eccentric characters and was written in a poetic yet hilarious way that will make most readers laugh all through till the end—an interesting book that can lighten anyone’s mood!

BIO: Marc Jampole wrote The Brothers Silver (Owl Canyon Press, 2021), Music from Words (Bellday Books, 2007) and Cubist States of Mind/Not the Cruelest Month (Poet’s Haven Press, 2017). His poems and short stories have appeared in many journals and anthologies. A former television news reporter and public relations executive, Marc writes the OpEdge blog and is immediate past president of the board of Jewish Currents, a magazine of politics and arts.