Home > The Chronomancer and the Book of Worms 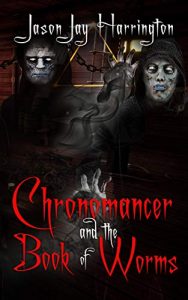 In Malkanor, humanity was still at its cradle and yet to evolve, farming tools made with iron had just been invented. Black magic and sorcery were part of normal life even though its use was highly regulated. Meanwhile, the royal family and noble class still treated peasants more or less like slaves.

Rylin was poor just like his peasant parents and the other impoverished villagers. However, despite the fact he was still a boy and from a very humble background, he hated injustice and would often intervene even when the odds are stacked against him. An attempt by the rude prince to harm his friend had caused him to release a magical power he wasn’t aware he possessed.

Possessing black magic was bad enough for a peasant but trying to murder the prince is a terrible offence that is punishable with immediate beheading. Would Rylin survive what was coming for him? Or would it be a stepping stone toward his destiny?

The Chronomancer and the Book of worms is an enchanting novel that would make anyone’s day.

BIO: I live with my wife Suanne and our son James, and work full time as a production associate manufacturing airbags. I have enjoyed fantasy and horror since I was six, and it has evolved to a passion. I have always had a very strong imagination, which has drawn me towards reading. Writing stories is my largest and most potent release for my imagination. I am proudly a geek to the core of my being, and I hope to give something back to geekdom in the form of my characters, worlds, and tales of magic and horror.