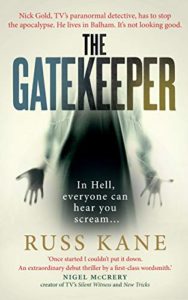 The Gatekeeper has a compelling intro, the stuff classics are known for. Now consider this; I was able to glean that Kevin Spacey’s career was in shambles, the Chevy he inherited from his father was a 1975 model which he has not serviced in five years and is giving him a hell of a time—all within the first paragraph or so!

Reading further, the book became a little complicated as the story, timeline and characters kept changing within short intervals. At a point, The Gatekeeper appears more like an encyclopedia than a novel, with a huge dose of politics, history and geography dominating its plot.

As the story unfolds, it dwelt on the dominant character, Nick Gold who worked in a production studio alongside Adam Farthing, the director. Nick Gold found himself battling to create a balance between the demands of his studio work and everyday living in the South of London. However, it took a different dimension when he arrived in the United States and found it difficult adapting into a new life that was different from what he was accustomed to in London.

In the United States, he got entangled in a murder case that involved Loretta who was accused of murdering her husband. All Nick Gold wanted was to save her at all cost but the odds were stacked against them.

The Gatekeeper is an interesting novel once you are able to maneuver its complex nature.