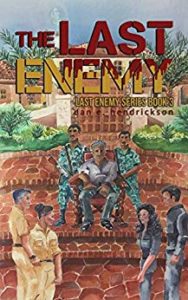 As the last in the series, most of the characters in The Last Enemy have matured very well and the plot equally extended to accommodate more scenes. Marnia, daughter of the former president of Mexico has become more ruthless in her campaign as a cartel crusher. Marnia’s clampdown on Anthony Santiago’s cartel that controls supplies going to the Western half of the United States only paved the way for Max to fill the vacuum. However, Max wasn’t living in a fool’s paradise. He was smart enough to know that once Marnia completely takes out Santiago, she was certainly going to come for him with full force. Thus he had no other choice than to fortify his defenses with the limited time he has. In-between was the cat with nine lives, Boris who has defied death on many occasions and yet has continued to call the shots in underworld of drug cartels.

Other characters in the series like Jacob, Danielle and Mary are still very much around but Max’s successful kidnap of the Jacob’s family while selling the outside world a dummy that they died in a plane crash all added to the intrigues.

One salient point about The Last Enemy is the fact that it is loaded with action and would definitely be a delight to lovers of thrillers.