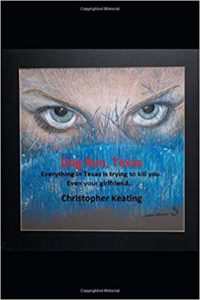 The moment you start turning the pages of this book, one thing that will strike you immediately is the exceptionally well developed characters. The author left nothing to chance as he described each character as well as the scenery extensively, thus giving the reader the sort of clarity that seems to jump in one’s face.

The story center’s on Dallas, a successful company attorney who suddenly lost the motivation to continue with the momentum as a high flyer after a terrible accident claimed the lives of his wife and son. As a result, he was glad to be relieved of his job—albeit temporarily as he embarked on a journey to rediscover himself.

Dog Run, Texas is quite an interesting story that could make anyone’s day.

BIO: Christopher Keating retired from the Navy and a career in academia to the Texas Hill Country. He now spends his time writing, long distance hiking, and howling at the moon.